Cyclic apps are built and deployed into AWS from code that originates in Github.

To trigger a build and deployment, install the Cyclic Github app on any public repo. On first installation we will assign your repo to an app and give it a public url such as random-words.cyclic.app. We will then build and deploy your app as described below. On future commits to the default branch (for example: merges of PRs or pushes) Github will send a webhook api call to us. We will then perform the same build and deploy steps.

The input of the build step is a single commit in a git repo and the output is a zip archive that can be deployed and run inside of an AWS lambda with the Cyclic lambda runtime. 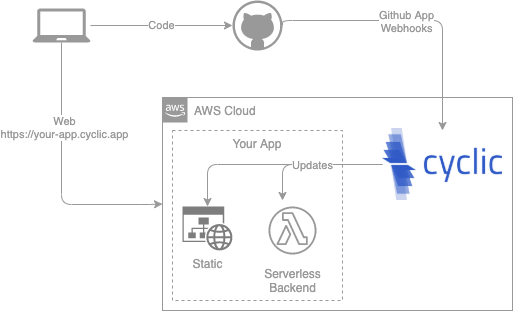 The following is a close approximation of the code we use to take your code repo and turn it into an artifact that can be run inside of AWS Lambda with the Cyclic lambda runtime.

Note: we have limits on the maximum amount of disk space used for code + dependencies while building and on the final bundle size. See limits page for more details.

NPM executes several lifecycle scripts as part of the npm install and npm run build. According to the documentation these are run in the following order:

By default, the build process and the above lifecycle scripts:

It is possible to customize this process with Advanced Build Options:

The root path specifies which directory Cyclic will run build scripts. For example for a repository structured as:

To have cyclic run npm run build in the frontend directory, configure "Root Path" as /frontend.

The contents of the Output Path are bundled for deployment. For example if at the end of the above build, a build directory is generated inside /frontend:

To make sure that the build output are the only files to be bundled, specify /frontend/build as the Output Path.

Unless the output is a static site, the output directory should still contain a package.json with a valid start script for run time.

Read more about the launch procedure.

Check this toggle if the contents of the output directory are only static files and do not contain a server instance. This applies to build outputs of static site framework builds such as React, Vue, Angular, etc.

This video will give you an example of how to deploy a static site without a backend on Cyclic:

Newly deployed Cyclic apps will use Node.js v18.12.1 by default. If you are using a framework or library that requires an older version of Node.js to function properly, you may adjust it here.